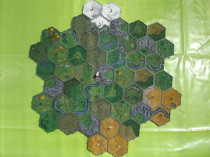 In May 2021 we will have the next campaign. Lookking forward!

We had another campaign in 2016 using my self designed campaign rules and the self made campaign system.

The "Arturia" campaign has been played from 18.-20.07.2014. This year eight realms (Chaos, Dwarves, Empire, Goblins, Khemri, Skaven, Witch Hunter and Vampires) fight for glory. I have extended and developed the campaign system and created a new map solution.

I organized a Warmaster campaign from 19.-21.07.2013 with the titel "Legenden von Arturia". Six armies (Araby, Chaos, Dwarves, Empire, Khemri and Orcs) fought for victory. The campaign was successful finished. I will write an article in English about the campaign for the fanzine Warmaster digest which is published within the specialist-arms.com homepage for free. Second edition with the campaign report can be found at the mentioned homepage or here.

2010 a large European campaign was organized. The special thing herby was that the battles which has been played within each region had an impact on the result of the campaign. If you are interessted please follow the link.

Once a year the EuroGT was organized over several years. Within this European Campaign tournament players of various tabletop systems (Warmaster, Warhammer and Mordheim) met for a weekend. The last EuroGT happend in Karlsruhe and was organized by myself.

Unfortunately since 2011 no EuroGT has been organized.